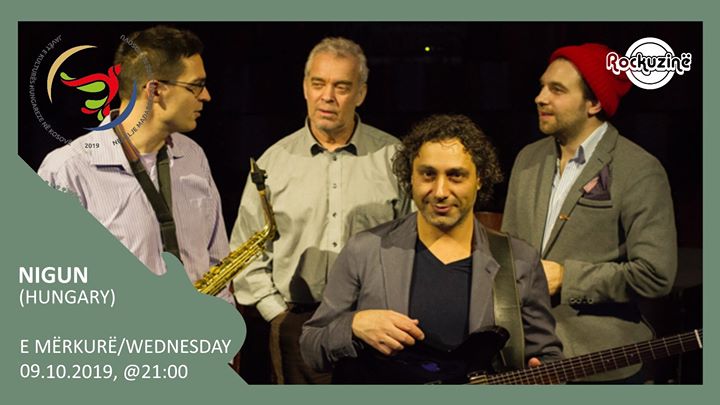 This event is supported by Hungarian Embassy Pristina, and it is a part of #HungarianCulturalWeeks in Kosova.

Nigun Band founded by Andras Parniczky guitarist and composer in 2001. Uniquely in the European jazz scene, the formation originates its music from the Eastern European Jewish traditions. Although Nigun’s music can be best labelled as “Klez-jazz”, the creativity and spontaneous spirit of the musicians are also very significant, as well as their attempt to combine different genres. Which we can enjoy on their last album titled Live inem Sargfabrik (Fono Records). During the years the band scored great success with performing in many prestigious festivals as the Athens Technopolis Jazz Festival, Bravo Art Festival Brussels, Klezmore Fest Vienna, Jazz Festival Brno, Jazz Festival Bansko, the Mol Jazz Festival, Sziget Festival, Mediawave and Kulturfest NY City as well as various events all over Europe and overseas.
Nigun often works together with guest musicians, as their third album Bale Kulturnik (2006), featuring the Israeli saxophonist Daniel Zamir (Satlah). In the same year, members of the group participated in John Zorn’s Cobra performance in the Palace Of Arts (Budapest, Hungary) under the direction of Zorn himself. They also shared the stage with Don Byron, Frank London and Matt Darriau (Klezmatics), Steven Bernstein, Aaron Alexander (Hasidic New Wave), Yale Strom, Amikam Kimelman, Miklos Lukacs (Charles Lloyd), Mihaly Borbely and Daniel Szabo.

“For me this wonderful story principally means the manifestation of team unity, which ultimately results in extraordinary music in an extraordinary medium. Not incidentally I reckon Nigun’s album is the best of this year’s Hungarian concert albums for the time being.” Sandor Olasz, Riff 2016.

“Parniczky’s guitar tone can be considered mature also in international comparison, yet not this success of a long-term development determines the concert recording, but his ability to place his play – that has become surprisingly ornamental by now – in various situations in appropriate functions. Previously, I rather considered him a good band leader, a summing personality, but now it is obvious that he has become one of the best guitarists in Hungary.” Zoltan Vegso, ES 2016.

“Nigun had started their musical program with crossing East European Jewish music and jazz. Nowadays they speak more in the language of contemporary jazz, based on a complex composition thinking of the band leader. This effort is verified with awesome solos.”
Gabor Turi, Magyar Nemzet 2014.

“One will love the new album of Nigun whom are interested in how the old melodies take a new lease on life. Not word-for-word but redefined with an extraordinary, very unique and creative vocabulary.” Balint Bereczki, Jazzma.hu 2013.